ESEB 2013 is over. I’ve had a great time, met with a lot of cool people and actually coped reasonably well with the outdoor temperature. As a wimpy Swede, I find anything above 30 degrees Celsius rather unpleasant. There have been too many talks and posters to mention all the good stuff, but here are a few more highlights:

Trudy Mackay’s plenary on epistasis in quantitative traits in D. melanogaster: Starting with the Drosophila Genetic Reference Panel and moving on to the Flyland advanced intercross population, Mackay’s group found what appeared to be extensive epistasis in several quantitative traits. Robert Anholt spoke later the same day about similar results in olfactory behaviour. While most of the genetic variance on the population level is still effectively additive, there seems to be a lot of interaction at the level of gene action, and it hinders QTL detection. The variants that did show up appeared to be involved in common networks. Again, we ask ourself how big these networks are and how conserved they might be among different species.

How did all this epistasis come about then? Mackay’s answer is phenotypic buffering or canalisation (as we say in the Nordic countries: a beloved child has many names). That is, that the organism has a certain buffering capacity against mutations, and that the effect of many of them are only revealed on a certain genetic background where buffering has been broken. See their paper: Huang et al (2012). Mackay mentioned some examples in answer to a question: potentially damaging exonic mutations travelled together with compensatory mutations that possibly made them less damaging. It would be really fun to see an investigation of the molecular basis of some examples.

(Being a domestication genetics person, this immediately brings me to Belyaev’s hypothesis about domestication. Belyaev started the famousic farm fox domestation experiment, selecting foxes for reduced fear of humans. And pretty quickly, the foxes started to become in many respects similar to dogs. Belyaev’s hypothesis is that ‘destabilising selection’ for tameness changed some regulatory system (probably in the hypothalamus–pituitary–adrenal axis) that exposed other kinds of variation. I think it’s essentially a hypothesis about buffering.)

Laurent Excoffier about detecting recent polygenic adaptation in humans. Very impressive! The first part of the talk presented a Fst outlier test applied to whole pathways together instead of individual loci. This seems to me analogous to gene set enrichment tests that calculate some expression statistic on predefined gene sets, instead of calculating the statistic individually and then applying term enrichment tests. In both cases, the point is to detect more subtle changes on the pathway as a whole. As with many other enrichment methods, particularly in humans, it is not that obvious what to do next with the list of annotation terms. Even when the list makes good biological sense — really, is there a gene list that wouldn’t seem to make at least a bit of biological sense? The results do (again) imply epistasis in human immune traits, and that is something that could potentially be tested. Though it would be a heroic amount of work, I hope someone will use this kind of methods in some organism where it is actually possible to test the function and compare locally adapted populations.

Alison Wright’s talk on Z chromosome evolution. She works with Judith Mank, and I’ve heard a bit about it before, but sex chromosomes and the idea that you can trace the ‘strata’ of chromosome evolution are always fascinating. Wright also presented some interesting differences in the male hypermethylated region between birds with different mating systems.

William Jeffery on blind cavefish: I’ve been thinking for ages that I should blog about the blind cavefish (for popular/science and in Swedish, that is), because it’s such a beautiful example. The case for eye regression as an adaptive trait rather than just the loss of an unnecessary structure seems pretty convincing! Making an eye regress at the molecular level seems at once rather simple — removal of the lens (by apoptosis in the blind cavefish) seems to be all that is needed — and complex (it’s polygenic and apparently not achieved the same way in all blind cavefish populations).

Virpi Lummaa’s plenary about using parish records from preindustrial Finland to investigate hypotheses about reproduction, longevity and menopause. I heard about the Grandmother hypothesis ages ago, so I knew about it, but I didn’t know to what extent there was empirical support for it. Unfortunately, that many of the cases where I’ve heard a nice hypothesis but don’t know the empirical support turn out to be disappointments. Not this time, however! On top of all the good stuff in the talk, Lummaa had very pretty slides with old photos and paintings by Albert Edelfelt. The visual qualities were surpassed only by Rich FitzJohn’s slides. 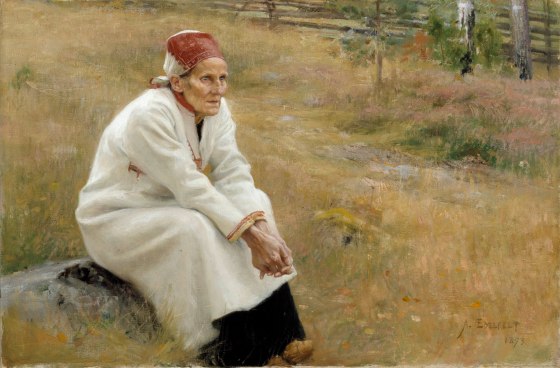 Two things that were not so great:

The poster sessions. Now my poster session on Friday turned out very well for me, but many others weren’t so lucky. I don’t know why half of the posters were hung facing the wall with hardly enough space for people to walk by the poster board, but it was a terrible idea and must have stopped a lot of people from seeing more posters.

The gender balance. According to Julia Schroeder only 27% of invited speakers were women. I don’t know how it worked behind the scenes and what the instructions to symposium organisers were, and there might not be an easy fix, but this urgently needs fixing.

Of course, there were many more good talks and posters than the handful I’ve mentioned, and apart from them, the twitter feed and tweetup, the social gatherings and the fact that there were actually several interesting people that came to my poster to chat were highlights for me. I come home with a long list of papers to read and several pages of things to try. Good times!