This is a relatively recent preprint on how correlations between genetic variants can limit the response to selection, with experimental evolution in bacteria.

Experimental evolution and selection experiments live on the gradient from modelling to observations in the wild. Experimental evolution researchers can design the environments and the genotypes to pose problems for evolution, and then watch in real time as organisms solve them. With sequencing, they can also watch how the genome responds to selection.

In this case, the problem posed is how to improve a particular cellular function (”module”). The researcher started out with engineered Escherichia coli that had one component of their translation machinery manipulated: they started out with only one copy of an elongation factor gene (where E.coli normally has two) that could be either from another species, an reconstructed ancestral form, or the regular E.coli gene as a control.

Then, they sequenced samples from replicate populations over time, and looked for potentially adaptive variants: that is, operationally, variants that had large changes in frequency (>20%) and occurred in genes that had more than one candidate adaptive variant.

Finally, because they looked at what genes these variants occurred in. Were they related to translation (”TM-specific” as they call it) or not (”generic”). That gave them trajectories of potentially adaptive variants like this. The horizontal axis is time and the vertical frequency of the variant. The letters are populations of different origin, and the numbers replicates thereof. The colour shows the classification of variants. (”fimD” and ”trkH” in the figure are genes in the ”generic” category that are of special interest for other reasons. The orange–brown shading signifies structural variation at the elongation factor gene.)

This figure shows their main observations:

The question is: when there aren’t further adaptive variants in translation genes, is that because it’s impossible to improve translation any further, or because of interference from other variants? They use the term ”evolutionary stalling”, kind of asexual linked selection. Because variants occur together, selection acts on the net effect of all the variants in an individual. Adaptation in a certain process (in this case translation) might stall, if there are large-effect adaptive variants in other, potentially completely unrelated processes, that swamp the effect on translation.

They argue for three kinds of indirect evidence that the adaptation in translation has stalled in at least some of the populations:

Stalling depends on large-effect variants, but after they have fixed, adaptation might resume. They use the metaphor of natural selection ”shifting focus”. The two non-translation genes singled out in the above figure might be examples of that:

While we did not observe resumption of adaptive evolution in [translation] during the duration of this experiment, we find evidence for a transition from stalling to adaptation in trkH and fimD genes. Mutations in these two genes appear to be beneficial in all our genetic backgrounds (Figure 4). These mutations are among the earliest to arise and fix in E, S and Y populations where the TM does not adapt … In contrast, mutations in trkH and fimD arise in A and P populations much later, typically following fixations of TM-specific mutations … In other words, natural selection in these populations is initially largely focused on improving the TM, while adaptation in trkH and fimD is stalled. After a TM-specific mutation is fixed, the focus of natural selection shifts away from the TM to other modules, including trkH and fimD.

This is all rather indirect, but interesting. Both ”the focus of natural selection shifting” and ”coupling of modules by the emergent neutrality threshold” are inspiring ways to think about the evolution of genetic architecture, and new to me.

Venkataram, Sandeep, et al. ”Evolutionary Stalling and a Limit on the Power of Natural Selection to Improve a Cellular Module.” bioRxiv (2019): 850644.

If you’re the kind of geneticist who wants to know about causative variants that affect selected traits, you have probably thought about how to combine genome scans for signatures of selection with genome-wide association studies. There is one simple problem: Unfortunately, once you’ve found a selective sweep, the association signal is gone, because the causative variant is fixed (or close to). So you need some tricks.

This is a short review that I wrote for a research topic on the genomics of adaptation. It occurred to me that one can divide the ways to combine selection mapping and genetic mapping in three categories. The review contains examples from the literature of how people have done it, and this mock genome-browser style figure to illustrate them.

You can read the whole thing in Frontiers in Genetics. 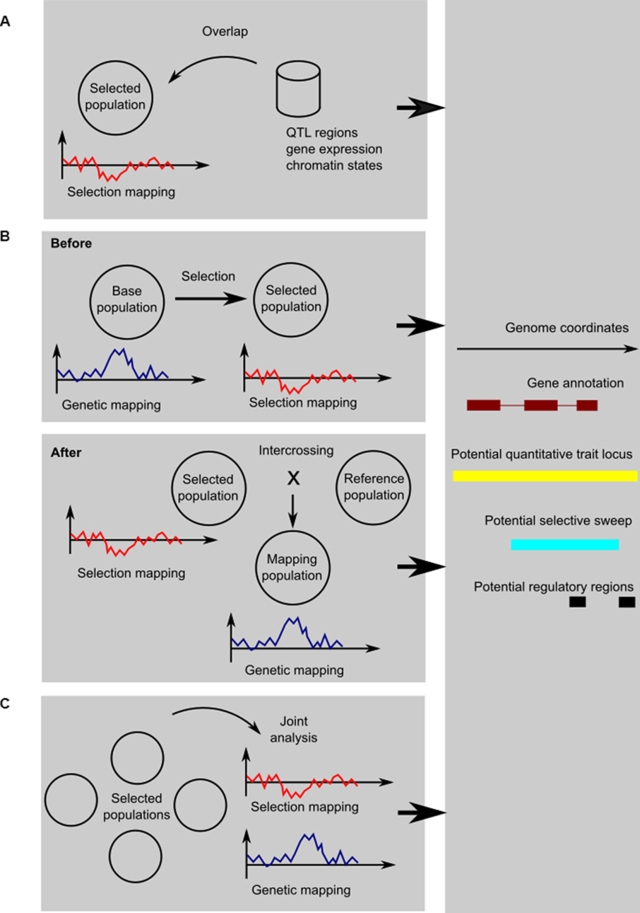 What is ”function”? In discussions about junk DNA people often make the distinction between ”selected effects” and ”causal roles”. Doolittle & Brunet (2017) put it like this:

By the first (selected effect, or SE), the function(s) of trait T is that (those) of its effects E that was (were) selected for in previous generations. They explain why T is there. … [A]ny claim for an SE trait has an etiological justification, invoking a history of selection for its current effect.

In other words, their argument goes: a DNA sequence can be without a selected effect while it has, potentially several, causal roles. Therefore, junk DNA isn’t dead.

Two things about these ideas:

First, if we want to know the fraction of the genome that is functional, we’d like to talk about positions in some reference genome, but the selected effect definition really only works for alleles. Positions aren’t adaptive, but alleles can be. They use the word ”trait”, but we can think of an allele as a trait (with really simple genetics — its genetic basis its presence or absence in the genome).

Also, unfortunately for us, selection doesn’t act on alleles in isolation; there is linked selection, where alleles can be affected by selection without causally contributing anything to the adaptive trait. In fact, they may counteract the adaptive trait. It stands to reason that linked variants are not functional in the selected effect sense, but they complicate analysis of recent adaptation.

The authors note that there is a problem with alleles that have not seen positive selection, but only purifying selection (that could happen in constructive neutral evolution, which is when something becomes indispensable through a series of neutral or deleterious substitutions). Imagine a sequence where most mutations are neutral, but deleterious mutations can happen rarely. A realistic example could be the causal mutation for Freidreich’s ataxia: microsatellite repeats in an intron that occasionally expand enough to prevent transcription (Bidichandani et al. 1998, Ohshima et al. 1998; I recently read about it in Nessa Carey’s ”Junk DNA”). In such cases, selection does not preserve any function of the microsatellite. That a thing can break in a dangerous way is not enough to know that it was useful when whole.

The same example is relevant. It seems like the Friedriech’s ataxia-associated microsatellite does not fulfill the selected effect criterion. It does, however, have a causal role, and a causal role relevant to human disease, at that.