Later the same day as the post on reviewing was published, I saw the paper by Kovanis and coworkers on the burden of peer review in biomedical literature. It’s silly of me that it didn’t occur to me to look for data on how many papers researchers review. Their first figure shows data on the number of reviews performed 2015 by Publons users: 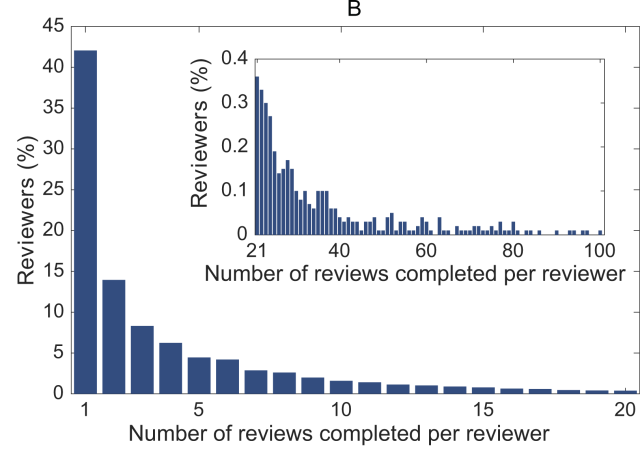 If we take these numbers at face value (but we probably shouldn’t, because Publons users seem likely to be a bised sample of researchers), my 4-6 reviews in a year fall somewhere in the middle: on the one hand, more than half of the researchers review fewer papers, but it’s a lot less than those who review the most.

This paper estimates the supply and demand of reviews in biomedical literature. The conclusion is lot like the above graph: reviewer effort is unevenly distributed. In their discussion, the authors write:

Besides, some researchers may be willing to contribute but are never invited. An automated method to improve the matching between submitted articles and the most appropriate candidate peer reviewers may be valuable to the scientific publication system. Such a system could track the number of reviews performed by each author to avoid overburdening them.

This seems right to me. There may be free riders who refuse to pull their weight. But there are probably a lot more of people like me, who could and would review more if they were asked to. A way for editors to find them (us) more easily would probably be a good thing.