A couple of weeks ago, I was at a symposium on the history of genetics in animal breeding at the Institute of Advanced Studies in the Humanities, organized by Cheryl Lancaster. There were talks by two geneticists and two historians, and ample time for discussion.

Gregor Gorjanc presented the very essence of quantitative genetics: the pedigree-based model. He illustrated this with graphs (in the sense of edges and vertices) and by predicting his own breeding value for height from trait values, and from his personal genomics results.

Then, yours truly gave this talk: ‘Genomics in animal breeding from the perspectives of matrices and molecules’. Here are the slides (only slightly mangled by Slideshare). This is the talk I was preparing for when I collected the quotes I posted a couple of weeks ago.

I talked about how there are two perspectives on genomics: you can think of genomes either as large matrices of ancestry indicators (statistical perspective) or as long strings of bases (sequence perspective). Both are useful, and give animal breeders and breeding researchers different tools (genomic selection, reference genomes). I also talked about potential future breeding strategies that use causative variants, and how they’re not about stopping breeding and designing the perfect animal in a lab, but about supplementing genomic selection in different ways.

Cheryl Lancaster told the story of how ABGRO, the Animal Breeding and Genetics Research Organisation in Edinburgh, lost its G. The organisation was split up in the 1950s, separating fundamental genetics research and animal breeding. She said that she had expected this split to be do to scientific, methodological or conceptual differences, but instead found when going through the archives, that it all was due to personal conflicts. She also got into how the ABGRO researchers justified their work, framing it as ”fundamental research”, and aspired to do long term research projects. 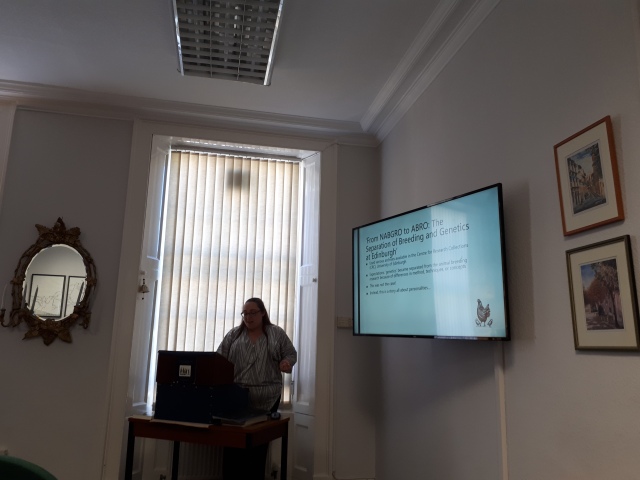 The discussion included comments by some of the people who were there (Chris Haley, Bill Hill), discussion about the breed concept, and what scientists can learn from history.

What is a breed? Is it a genetical thing, defined by grouping individuals based on their relatedness, a historical thing, based on what people think a certain kind of animal is supposed to look like, or a marketing tool, naming animals that come from a certain system? It is probably a bit of everything. (I talked with Jim Lowe during lunch; he had noticed how I referred to Griffith & Stotz for gene concepts, but omitted the ”post-genomic” gene concept they actually favour. This is because I didn’t find it useful for understanding how animal breeding researchers think. It is striking how comfortable biologists are with using fuzzy concepts that can’t be defined in a way that cover all corner cases, because biology doesn’t work that way. If the nominal gene concept is broken by trans-splicing, practicing genomicists will probably think of that more as a practical issue with designing gene databases than a something that invalidates talking about genes in principle.)

What would researchers like to learn from history? Probably how to succeed with large research endeavors and how to get funding for them. Can one learn that from history? Maybe not, but there might be lessons about thinking of research as ”basic”, ”fundamental”, ”applied” etc, and about what the long term effects of research might be.